Although the Pony Express was only in operation for 18 months, it is a powerful icon of the American Old West. This precursor to the modern postal service provided a way to deliver messages across the country. 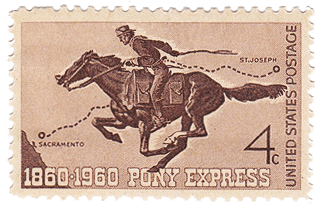 It began in April 1860 and ceased operation in October 1861. In that time, it managed to secure a place in history and an influence that would last for generations.

Origins of the Pony Express

The concept of the horseback relay mail service dates back several centuries before the Old West. There are records of Marco Polo seeing messages delivered in this way as far back as 13th Century China, and the practice might be even earlier.

However, the Pony Express was one of the longest routes of its kind in history, and its role in the formation of the country makes it especially iconic. The mail system was developed as a way to speed up and improve communication between the east coast and California, whose population had dramatically exploded in the second half of the 1800s thanks to the Gold Rush. As half a million opportunistic Americans headed west, and political tensions threatened Civil War back home, a reliable long-distance mail delivery service became a priority.

There were several attempts to establish a reliable coast-to-coast mail relay system, but none were efficient enough to satisfy the needs of the growing population until businessmen William H. Russell, Alexander Majors and William B. Waddell stepped up to the task of creating what would come to known as the Pony Express.

Russell, Majors & Waddell was a freighting firm operated by Missouri businessmen. Their experience in overland freighting transferred well to the postal service, and they were eager to cash in on the financial support of the government offered by California Senator William Gwin. Utilizing preexisting routes between Salt Lake City and the Missouri River, the team extended the route and set to the task of hiring horses and crew for the job.

The Pony Express, as the service came to be called, was successful in swiftly delivering newspapers, letters and packages across the country. As a business venture, however, it failed. The high cost of competitive wages for riders coupled with the expense of horse acquisition and maintenance added up quickly. It’s estimated that the Pony Express lost approximately $200,000 by the end of its 16-month operation. In today’s currency, that would be a loss of over $5 million!

Despite its short lifespan, the Pony Express remains an American icon because it so boldly embodies the era of the Old West. It was a project that combined American determination and ingenuity with a spirit of freedom, danger and adventure.

Pony Express riders had high-paying but dangerous jobs. At the time, a journey through the western territories would put a rider in the path of potentially hostile Native American tribes and outlaws. They would also face harsh terrain and difficult weather conditions as they navigated the wilderness.

The individuals who manned the relief stations situated along the delivery route had an even more dangerous life. Stock keepers lived in small, isolated outposts that were vulnerable to attack from hostile forces.

The End of the Pony Express

The extreme danger, high operating costs and low profit margins were only some of the factors that led to the early demise of the Pony Express. One of the biggest factors was the government-subsidized transcontinental telegraph line that was approved on June 16, 1860. While the Overland Telegraph Company of California and the Pacific Telegraph company of Nebraska were building their lines, the Pony Express continued to operate, but by October 26, 1861, the lines were completed. San Francisco now had a direct line of communication with New York, and the Pony Express came to an end.

People interested in the history of the Pony Express can follow its 2,005-mile route from San Francisco, California to St. Joseph, Missouri. The Pony Express National Historic Trail is maintained by the National Park Service, and it provides a history-filled adventure for willing travelers.

PhysicalAddress.com is a cloud-based virtual mail and address service. We provide a secure streamlined service that delivers high-quality mail scans directly to a client’s online private virtual mailbox. Access to mail is available across multiple platforms, including iOS and Android. The mailbox forwarding service allows our clients to view, open and forward mail from anywhere at anytime.

Business clients can setup a virtual business address by leveraging multiple premium physical addresses offered by PhysicalAddress.com to attract international clientele, set up a Corporation or LLC, market their company and virtualize their postal mail.