The history of Wall Street by PhysicalAddress.com. Get a business address and a virtual 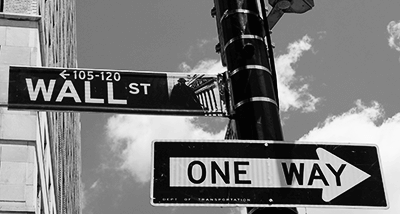 mailbox on Wall Street with PhysicalAddress.com.

The Wall Street we know and love today is an economic powerhouse, standing at the center of the world’s financial system and generating massive amounts of wealth for all who work there. Straddling lower Manhattan from East of Broadway to the East River, the street has always been at the heart of New York’s financial district.

But Wall Street has also been at the epicenter of some of the most calamitous events in history. It’s the place in which stock traders saw the dizzying heights of the Dotcom boom and the roaring twenties, and it’s also the place where traders witnessed the collapse of the stock market in 1929 and 2008 and the birth the greatest economic upheaval in history: the Great Depression.

Wall Street’s origins began when New York was a small Dutch colony. The street was originally called de Walstraat, which was quickly Anglicised once Manhattan was transferred to the British. In the 19th century, Wall Street began to emerge as an American financial center, serving the needs of industrialists and the emerging middle class, fuelling the railroad boom and generating fabulous wealth for the new American Republic.

What many people don’t know about those early years of Wall Street is how volatile the market was. This was the era of the bull and the bear: the boom and bust era. Every few years the market would get whipped up into a frenzy. Traders would anticipate huge returns from some new company or investment. Prices of stocks would skyrocket, reaching incredible valuations. Then, as soon as word got around the investments weren’t what they seemed, investors would panic, depositors would pull their money out of banks, and financial institutions would collapse. Back then, banks would fail and go out of business, only to be replaced with new banks and even more ambitious business leaders.

With the advent of the 20th century and the setting up of the Federal Reserve, things began to change for Wall Street. Now there was a privately-run central bank with authority to create paper money from nothing. The hope was that the central bank would be able to coordinate the actions of the commercial banks and rescue Americans from the peaks and troughs of the financial cycle.

No such thing happened. Instead, America once again succumbed to the boom and bust that had dogged the nineteenth and early twentieth centuries. Following the end of the First World War – the war to end all wars – many Americans were filled with hope and optimism about the future. As confidence in the economy grew, aggregate demand picked up, ushering in an era of high growth. Before long, people began buying stocks with the new wealth they had, believing that stocks would continue to rise forever, providing handsome returns on their investments.

But there was a problem: stocks were hopelessly overvalued. There was no way that companies could deliver the sort of profits that the value of stocks implied – a giant bubble at the heart of Wall Street had developed.

Just two weeks before the Wall Street Crash of 1929, world-famous economist Irving Fisher – the man behind some of the most critical theories in economics – declared that there was not a bubble in the stock market. He truly believed that stocks were at fair value, and he chastised anybody who thought otherwise. To Fisher, nothing was wrong, and if anything did happen, it would only constitute a minor correction.

When the crash eventually came, all of the phony wealth that had been generated by the stock market evaporated overnight, and by November 1929 it was clear to everybody that the game was up. The American economic sank into a deep depression which dragged on for nearly a decade. Industrial output slumped to 60 percent of its pre-crash level and unemployment tipped the scales at 25 percent. Many Americans went hungry.

After the Second World War, the American economy finally emerged from recession and entered what economists call The Golden Era – a period of high economic growth and low unemployment. There were jobs aplenty in America, and Wall Street’s reputation improved once more.

Regulators, however, began to see that the fate of the world was literally in the hands of Wall Street financiers. They began to regulate, but despite all the new rules, crashes continued, most notably in tech stocks in 2000 and in all stocks in 2008.

Since then, Wall Street is again a place of global significance and remains one of the most famous streets in the world. What happens on Wall Street affects us all.

FAQs About Starting a Small or Home-Based Business in Delaware